Nick Deacon Fitness | My Name is Amy, and I Felt Helpless.
54523
post-template-default,single,single-post,postid-54523,single-format-standard,ajax_fade,page_not_loaded,,qode-title-hidden,qode_grid_1300,qode-theme-ver-13.1.2,qode-theme-bridge,wpb-js-composer js-comp-ver-5.4.5,vc_responsive 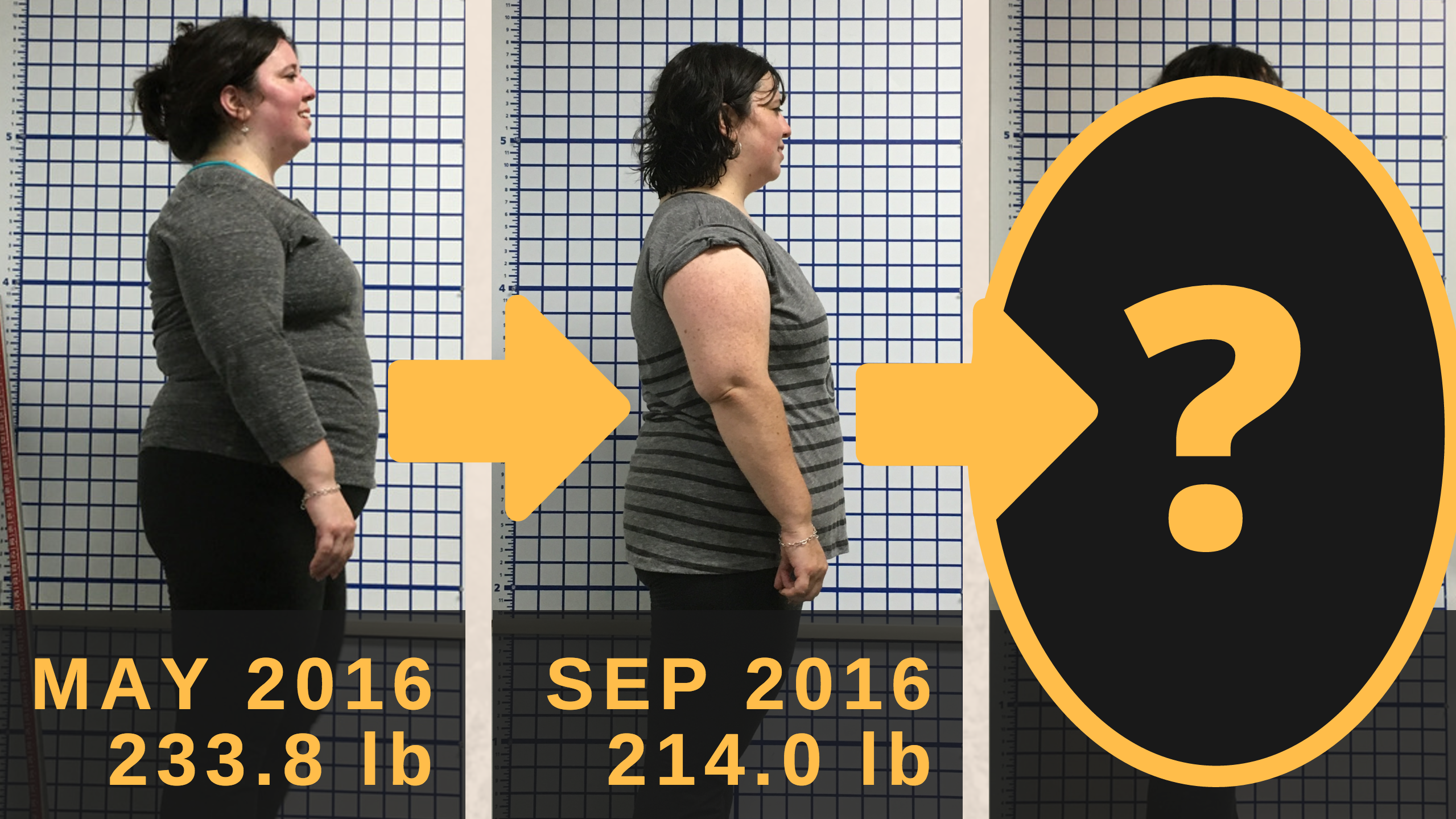 Posted at 21:35h in Success Stories by nick 2 Comments

I don’t know quite how it all started, but I had been steadily gaining weight since my teens. By this point it had become a huge problem to overcome. For many years my weight seemed so difficult to address and so easy to half-ass and procrastinate about.

I’d had a few bursts of success over the years at losing weight through exercise, dieting, or both. But they were always difficult and slow, and they all felt like a daily struggle.

…And I always ended up regaining the weight in relatively short order.

But suddenly at 41 I found myself thinking about it constantly.

Without a big change I knew I’d eventually (and before long) become diabetic, develop cardiovascular disease, and compromise my knees, hips, etc. But not only that! Even just *feeling* unhealthy and old was on the horizon (by some miracle it hadn’t hit yet).

I knew it was a matter of time.

Screw This, I Need Some Help!

With all that I’ve tried, I thought it might be time to bring in the professionals. There was a gym near where I work, so one day in May I went to check it out. I signed up for personal training sessions, and I was lucky enough to be assigned to Nick.

He asked a lot of good questions about my lifestyle and my history with weight loss and fitness, and he was focused on my answers. I sensed he was taking all my comments in with respect and not with pity, which made me feel like he was giving serious attention and deliberation to my problem.

These pictures were taken on the day of my first meeting with Nick – our assessment. Not so rosy a picture as I’d had in my head! And it’s definitely humbling to have your neck and thigh circumference (and everything else!) measured by some buff young dude.

Nick reassured me that this was a crucial starting point and that it was understandable to feel self-conscious, but that we needed to know the cold, hard facts before we could truly get started with serious change.

So I got over myself pretty quickly. 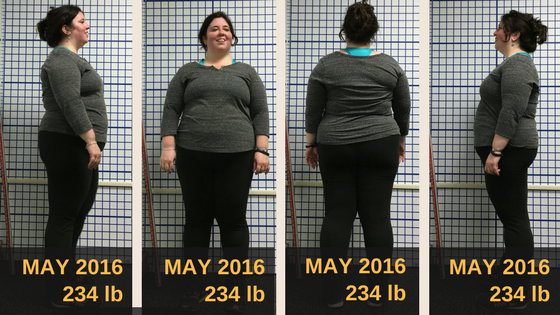 I Needed Something Radical

The weekly strength training sessions were challenging and felt beneficial off the bat, but you know what?

I was still so preoccupied with my health situation that I started to think about bariatric surgery.

Looking at the situation realistically, I figured no other method of losing weight would achieve and then actually *sustain* the significant weight loss I needed.

So I went to an information session held by a bariatric surgery clinic. They described the process leading up to the procedure, the surgery itself, and the expected results (and dangers).

To be honest, I left feeling pretty terrified and defeated. I knew it wasn’t for me, but I just felt forced to consider it. I knew I needed something radical, but what other option could there be?

I honestly didn’t know what else I could do.

Would This Really Work?

The next evening, I met with Nick for our weekly session. He asked me how I was doing. Little did he know what a loaded question that was…

I dropped the idea on him.

He had a lot to say on the matter. He could tell this was important to me, so he offered to scrap the workout to discuss instead.

From there, he asked me plenty of questions to understand my whole situation. I couldn’t help but think, “Wow – this guy seems like he really wants to help me get to the bottom of this.”

I admitted to him that my ultimate goal was to get my weight under control and get healthy. He was blunt and honest about what it would take to make that happen.

To my surprise as we spoke, he helped me understand that while exercise was a good thing, it was actually my nutrition that would be holding me back. He explained that in my case, putting my effort in nutrition would have the greatest effect towards my goal, not training.

He showed me why the general advice given to people who want to lose weight isn’t always appropriate for everyone.

As he explained more, I was interested to learn why people who have a lot of weight to lose actually struggle for different reasons than people who only have a little to lose.

He even helped me consider what the process would look like afterwards if I did ultimately decide to get the surgery.

Needless to say, he didn’t think bariatric surgery was the answer.

This gave me hope.

So he suggested I start a nutrition program with him in addition to the weekly strength training.

To be honest, I was afraid the program might be a rehashing of stuff I already knew about healthy eating…

…but I couldn’t have been more wrong.

Unlike other programs, it turned out to be a very tailored education in what *I* needed to do to lose fat.

The one thing about Nick is that he’s very focused, and he makes sure my goals and the path to reach them are clear and similarly focused.

At the end of each session he asks me to focus on a specific action over the ensuing 2 weeks. With Nick helping me, I always know what to do, and I always leave motivated and confident I can actually do what we discuss.

My very first habit statement, inspired and informed by our discussion during the first session, was a GAME changer. It was the only thing I needed to focus on for those 2 weeks and it seemed doable. It was specific and designed to ensure that I’d actually stick with it.

Well this might sound ridiculous… but it was easy, it was simple, and it fixed a host of bad behaviors right away!

Before long, I saw that I was having less cravings and feeling more full throughout the day. I even started skipping the takeout and cooking for myself!

This left me feeling motivated to stay on the high road and avoid excess carbs and fat. Subsequent sessions built on that habit and gave me more information and ideas for tackling other habits.

All of a sudden I was NOT helpless, and it was terrifically empowering.

Over the next 12 weeks, in addition to eating lots of good food, I was finding new ways to make meal planning easier and prevent/deal with cravings. With all the extra energy I had, I was also doing a lot more moderate physical activity, including commuting to work by bike several times per week for the first time.

I admit I didn’t stick completely to the virtuous path in those 12 weeks; I’m pretty weak in the willpower department.

But even still, the changes I made led to losing 24lbs, comfortably outside of the “morbid” range. At this lower weight, and with much improved diet and behaviors, I felt more fit and energetic.

Just look at my second assessment!! 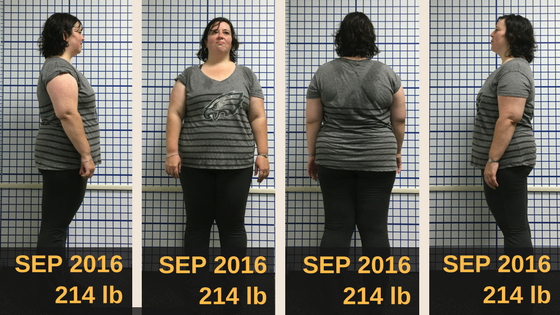 The next phase began in October 2016.

I began doing strength training with Nick twice weekly and continued to work on my nutrition program, little by little.

This phase wasn’t easy, and it seemed like everything that could go wrong did.

I had a lofty fat loss goal, but I didn’t stick with the nutrition quite as much as I had at first. Even worse, after an unfortunate series of small bike accidents I reduced my bike commuting.

Nick was still there to help and suggested special adjustments to my nutrition and activity habits.

As my third assessment date was approaching, I was well aware my weight had been only dropping slightly for the last few weeks, if at all.

I felt bad and was not looking forward to seeing the results of this phase that reflected no improvement towards my lofty weight loss goals.

The assessment came, and here are the results. 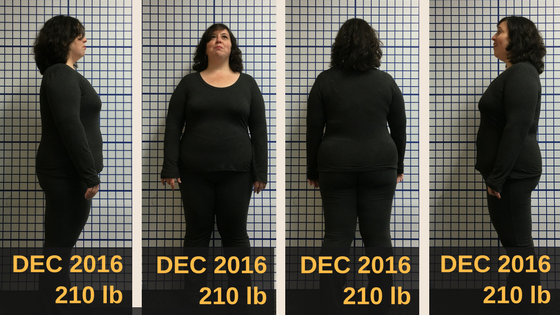 …As expected, at the end of this phase my weight had not dropped at all­­—but I didn’t gain any of the weight back either!

So even though I didn’t lose much weight during this phase, Nick helped me realize something…

This phase was still pretty successful at a different goal that I did not think to set—to maintain my previous weight loss!

The fact is it had been a whole 12 weeks and I didn’t gain any weight back (which I didn’t really think possible given my “backsliding” and previous patterns), I doubled the frequency of my strength training and was stronger, I was still energetic and active, and I had developed more discipline.

Last week I began my next 12-week phase. My goal is to lose a further 31lbs in this period. I’ve gotten specific rules and information from Nick on how to accomplish this, and I’ll get further support and advice from him throughout.

One week in, it all seems doable and I’m adhering closely to the regimen. I may be well on my way.

But you know what? Even if I don’t totally succeed in the near future, I’m not worried.

Everything is different from how I felt before I started working with Nick.

I now realize I am not a victim of my genes, a slow thyroid, truly crap willpower (seriously.), and poor impulse control (at least with food :P).

I am not helpless.

I now have concrete and simple tools and knowledge to make my goal happen…eventually. And I have Nick’s expert nutrition and strength training guidance in addition to his careful monitoring of my progress.

I no longer think steadily gaining more weight and developing preventable illnesses is inevitable. I guess it isn’t impossible, but I now see it as very unlikely.

In fact, now I see success as very likely. And I plan to crush that 31-lb goal.