Are You Being Fooled By These Protein Posers? | Nick Deacon Fitness
55366
post-template-default,single,single-post,postid-55366,single-format-standard,ajax_fade,page_not_loaded,,qode-title-hidden,qode_grid_1300,qode-theme-ver-13.1.2,qode-theme-bridge,wpb-js-composer js-comp-ver-5.4.5,vc_responsive 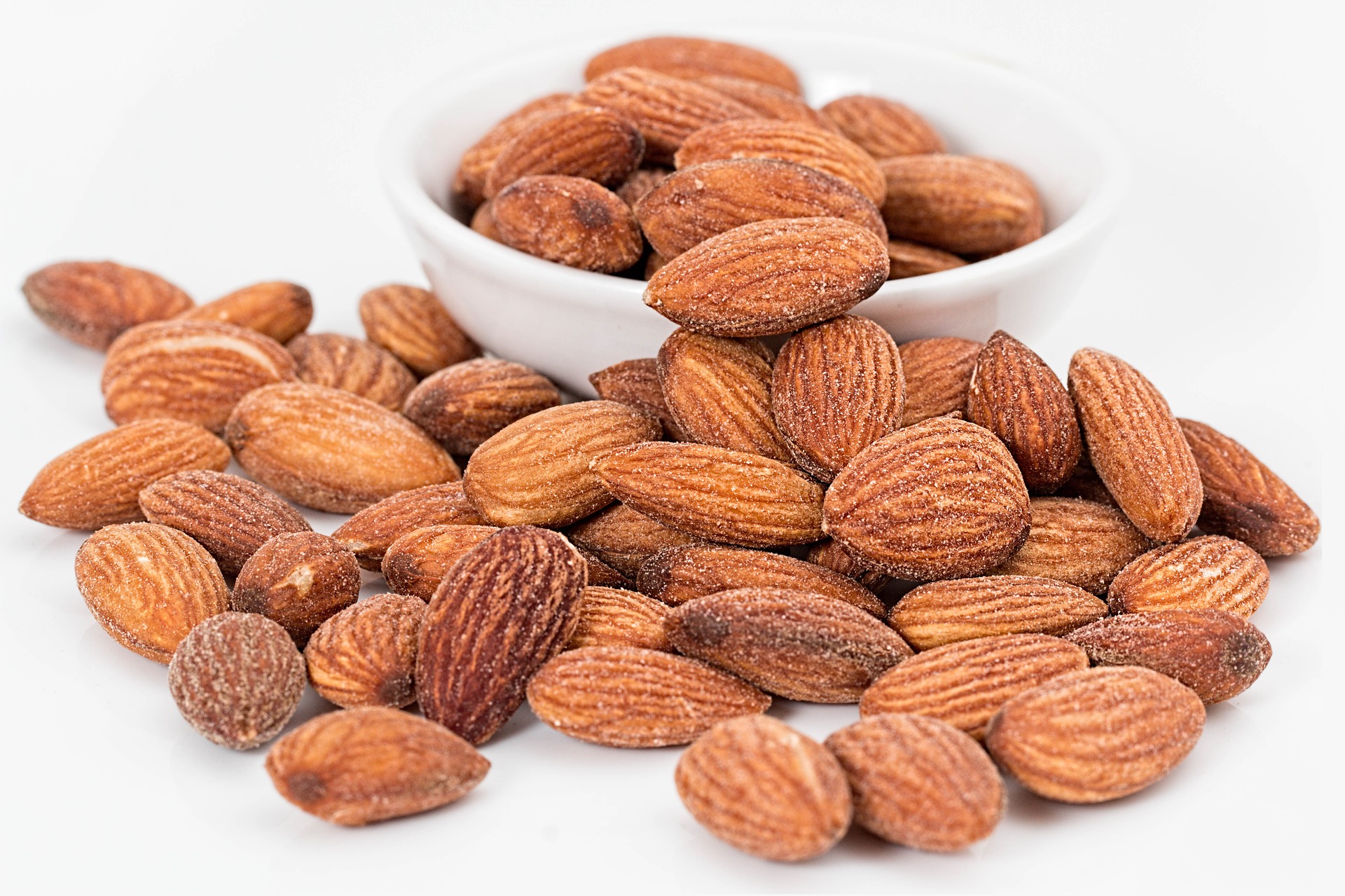 29 Dec Are You Being Fooled By These Protein Posers?

If you’ve spent any amount of time reading the weight loss magazines at the checkout line, following the fit foodies of instagram, or listening to Dr. Oz, you already know that…

Protein is like, pretty important for developing a lean and strong healthy body.

So where do you get it?

You could get it from meat, but meat isn’t the only thing with protein in it. You might have heard of some these other popular protein-rich foods and know that…

Quinoa is a magical grain that has all 9 essential amino acids!

And that vegan- and vegetarian-friendly legumes like black beans are an inexpensive source of fiber and protein! (Hummus, anyone??)

How about dairy products, like cheese, milk, and Greek yogurt? Surely you knew they are all loaded with high-quality animal proteins!

Or that easy-to-pack almonds are a super snack, giving us portable protein on-the-go!

And that eggs (and egg whites) are a classic “clean” food for the fit and muscular!

…And then Nick Deacon comes along and tells you you’ve been tricked.

Now before you get upset, I know, I know. Nutrition can be confusing.

It really doesn’t need to be. That’s why I put together 5 simple strategies to kickstart your fat loss.

But just stick with me to the end of this article, and I promise I’ll teach you everything you need to know to never be fooled by these protein posers again.

Can You Pick The Protein Posers?

While the advice to eat popular protein foods does have some truth to it, it’s usually delivered without context. This is why nutrition is downright confusing: generalized advice given without context can be misleading. And when it comes to your nutrition, context is everything.

So let’s bring it back into perspective.

“High-protein” foods like quinoa, beans, nuts, eggs, dairy products (yogurt and cheese) are praised for their protein content, but don’t be fooled!

For most of them, it’s a package deal. Some are actually higher in carbs or fats than protein, a fact which often goes unnoticed. To prevent this, I teach my trainees a special trick:

Most of the energy from a given food will come from one of these three nutrients:

To lose fat and build muscle, you need to eat these nutrients in the right amounts. That starts with knowing what your food is actually giving you.

Look at this chart comparing the macronutrient content for typical servings for various foods. 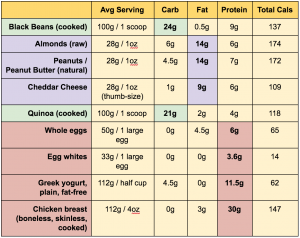 Eggs, egg whites, Greek yogurt, and chicken breast all have more protein in them than any other macronutrient.

This makes them protein foods.

(You could argue that whole eggs are a fat food based on the fat calories they provide, but let’s not get carried away right now.)

Almonds, peanuts, and cheese are highest in fat, even though they have some protein in them.

Instead, think of these as fat foods (not protein foods).

Beans and quinoa are highest in carbohydrate, even though they have some protein in them.

Instead, think of these as carb foods (not protein foods).

The real issue here is that these foods are often praised for their protein content, but protein isn’t actually their primary nutrient.

Instead, categorize them by their primary macronutrient!

Okay, so nuts are fat. And beans aren’t a protein food.

But they do still have some protein in them! Don’t the 9 essential amino acids in quinoa count for anything?

What about the non-protein foods, they still have protein in them. That’s good, right?

Quinoa has become famous for providing all 9 essential amino acids, making it a “complete protein.” This is why it’s such a popular choice for plant-based eaters. (The word essential means these are nutrients that cannot be produced in the body and must come from the diet.)

But even if you go to the gas station to buy the best high-octane triple super unleaded fuel in the world, a few meager drops won’t get you very far, no matter how high the quality.

Your body is no different. Quantity still matters.

While the magazines and morning news reports beat us over the head with just how sinful it is to overeat, did you know that under-eating can be just as problematic?

And while it seems the “complete protein” is high-quality, 4 grams of protein in an average serving of quinoa is still only 4 grams. Compare this to a target daily intake of, ehh…for now let’s say, somewhere around 150g*, 4g is barely a drop in the ocean.

(*Beyond the scope of this article. I’ll write another.)

The real issue is that by choosing the protein-posers low in protein (beans, nuts, quinoa, etc.), you won’t actually get enough protein.

KEY POINT: Getting enough total protein takes priority over the quality of protein.

How much is enough?

To lose fat and build muscle, we want to prioritize our tissue recovery. You can do this by eating at least 20-30g of high-quality protein at every meal. This will maximize muscle protein synthesis. (If you’re over 50 years old, this number increases.) These meals should also add up to a daily total of ~150g of protein if you have any desire to be lean and healthy.

Fortunately, it doesn’t matter whether this protein is coming from a single food (a chicken breast) or a few lower-protein foods combined together (ex: scrambled eggs with quinoa, broccoli, and slivered almonds). You just need to hit that threshold.

Hmm, you ever wonder how much quinoa you’d need to eat to reach that ~25g serving of protein?

Good news. I made another chart… 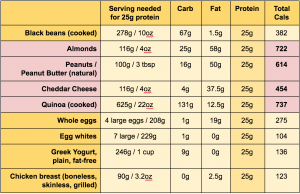 Whoa, check out the calorie loads on some of those foods!

With so much extra carbs or fat, it’s easy to go overboard on your energy intake before you even hit your protein targets.

The real issue here is that getting enough protein from these foods comes with a price:

You’re likely going to go way overboard on fat or carbohydrate calories to get there.

And eating too much food (in terms of calories) will prevent you from losing body fat, regardless of macronutrient source.

KEY POINT: To actually get enough protein from these protein-posers would mean over-consuming calories from carbs and fats.

But What About The Authentic Protein Foods?

We’ve been debunking misleading advice towards the protein posers that aren’t really protein foods, but I haven’t said much about why the chosen authentic protein foods are an issue.

So here we go.

Eggs, egg whites, and Greek yogurt are all definitely protein foods, but many people still make a critical mistake.

Due to their lower protein density, they don’t eat enough.

Not only do they not get enough protein, they aren’t used to eating a great enough volume of food.

My lifetime of anecdotal research clearly shows that for a given meal, the average person eats only 2 eggs…maybe 3. If they’re afraid of fat and cholesterol they might substitute egg whites instead. They’ll increase to 2 to 4 egg whites, but in terms of hitting 25g of protein, that’s still only halfway to that minimum target.

Even my sister (with her slight 5ft frame) will serve herself a few heaping spoonfuls of Greek yogurt to “get her protein” when she should probably be carving out half the tub.

We learned that quantity matters, and some foods just don’t cut it as protein foods.

But let’s shift focus and look back at the last chart.

Forget about calories for a second and just think…
How much of each food would you actually have shovel into your face to get enough protein? 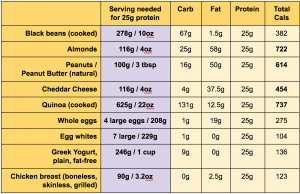 To get 25g of protein from black beans, you’d have to eat the whole can in one sitting (and not disrupt your appetite for your next meal).

Could you imagine eating a pound and a half of quinoa from a mixing bowl?
Did you pull out a bowl big enough to fit all that Greek yogurt?

Are you even buying enough eggs to eat 4 every day for the next week?
(That’s 2-3 dozen if you’re eating for one, honey.)

And just how willing are you to crack 7 eggs to separate the 7 yolks to get your 7 egg whites?

The actions done consistently over time are the ones that make the biggest impact.

So if you’re not used to eating large volumes of food, it’s probably a good idea to choose foods that don’t require you to eat so damn much!

Check the chart and compare the foods we’ve discussed with chicken breast. You n get a solid dose of 25g high-quality protein in just over 3oz. (That’s a tiny one! The size of your palm!)

But if you don’t have a problem with eating this much food, then this might be a non-issue (the other stuff still applies).

The real issue here is that unless you really check how much you’re eating or just tend to be a light eater in general, you’re unlikely to be getting enough protein from these foods. Their protein content simply isn’t dense enough, even the protein foods (i.e., eggs and Greek yogurt).

KEY POINT: Make sure you’re eating enough of your protein-foods to cover your 25g protein at each meal.

You won’t make the same mistake again because now you know better:

And like I said, meat isn’t the only thing with protein in it. But it’s still a damn good choice.