In my exploration and study of training, movement, therapy, emotional trauma, and the human condition, I have witnessed all sorts of SEEMINGLY unrelated phenomena. But it’s always tied together somehow.

Just two weeks ago I attended a new course by >>Dr. Seth Oberst: Stress, Movement, and Pain<<. Unexpectedly, it has helped me tie countless ideas together with the common concept of >>The Polyvagal Theory<<*. Although I didn’t know what to expect, the course was nothing short of impressive.

Of all the things I love about Dr. Seth Oberst, his teaching style takes the cake. Unlike most “teachers” who spit information at you and test you on your parroting skills, Dr. Oberst takes the high road. Once he gives you the raw materials, an impressive curation of information, science, and clinical case studies, he encourages you to synthesize your own takeaways. This is a refreshing take on nurturing your own creativity and pure education.

After several days of digesting it all, I have compiled my own notes and takeaways for you.

*If you have not yet read the >>PRIMER<<, go do that first. Then you will understand the underlying concepts and mechanisms I am about to discuss.

After deep scientific lecture, we moved to begin practicing the Somatic Recovery techniques on each other.

During the first demonstration, I sat and watched in disbelief.

The first guy to receive the technique f’n cried.

For seemingly no reason.

On the table, he asked if there was a tear in his eye. After sitting up, he described getting cold. After a few moments on the table, he began to actually well up with emotion. It was as if it needed time to bubble up after he sat up.

So I partner up with my friend, which I believe was a key component as you’ll see. He begins to perform the technique on me.

Once I begin to relax, it starts: A quiet snicker snowballs into uncontrollable laughter. Wave after wave of gut-busting giggles.

The kind of laughter that doesn’t belong in the library, or church, or school.

The kind of laughter that feels so good even though you’re terrified you’d get in trouble.

The kind of laughter that intensifies the more you try to hold it back.

The kind of laughter that no longer has anything to do with the spark that ignited it.

My neck was on FIRE and I was sweating. For the next 8 minutes, I laughed nonstop.

I’ve felt intense autonomic nervous reactions before, so I could recognize this.

I just surfed the wave and enjoyed the ride.

When we were finally done, I felt incredible.

The world felt like a playground. Nothing could possibly be too serious in that moment, it was all for play. It was as if any negative perception I held of the world in that moment was cleansed. Like going back to the ignorant bliss of childhood.

For years I’d heard that emotions get trapped in tissues.

I would hear story after story of people getting deep massages and having intense emotional releases.

As in, a masseuse drives a little elbow into your hips and you start crying – not from the pain – but a true emotional cry from an upset long forgotten.

Or you feel intensely giggly and unable to control your uproarious laughter, as I experienced.

I now realize the body is kind of like an ant’s antennae. It is an extension of your thoughts and feelings. Movements have to come from somewhere. I now see them as a visible expression of something deeper going on in your mind.

Exploratory curiosity and safety > notices red coil on the table > “what is that?” > [reach for red coil] > fingers burn and you pull your hand away.

The THREAD of that action can be traced back to emotion and thought. The movements were just expressions of what was going on inside of you.

I worked with a person who faced severe trauma very early in life.

He blamed himself, even though he was in fact the victim. He felt horrible shame. It made him want to hide from everyone – so he did.

Once I learned about his past, his rounded posture made all the sense in the world. He needed to always be guarding.

Through strength training and voicing the secrets he kept inside (he also saw a therapist), he was able to make massive progress.

Therapy helped him to see his experience more clearly. Strength training built a sense of confidence not just in himself but in his ability to improve himself, which he previously did not believe was possible. I believe it was his physical experience that gave him the opportunity to resolve some of these traumatic experiences.

The topic of changing your mindset came up at the seminar, which is big in the self-help world of Tony Robbins and Zig Ziglar.

This implies changing your mindset can happen under purely conscious control.

In reality, much of this occurs subconsciously. Your brain, with advice from your body, has already made calculated decisions, long before you could have any conscious input.

As if my mind hadn’t already been blown:

Simply changing your mindset might not be enough. There are subconscious factors at play. I now believe this is only one piece of the bigger puzzle.

Whatever your story is, your body and nervous system must also believe it.

Being stuck in a burning building is only a problem if you run out of EXITS (options).

You need options to survive, variability.

We talk about these survival patterns as if they’re bad, because so many bad things happen when you get stuck in them.

In reality, it’s not the PATTERN that is bad – we need them. We evolved these patterns as survival strategies, like tools in a toolbox.

So it’s not that the PATTERN is bad – it’s getting STUCK. When you can’t get out, THAT’S bad.

Think of a train switching between 3 parallel train tracks.

Like stagnant water. It needs to flow, turn over, renew, reset.

“So if you’re stuck in a pattern,” one of my clients asked…

“…are you stuck there forever?”

I initially struggled with this idea too.

When you experience a stressful event, it triggers a survival reflex and gets stored in your brain (and body).

After some thought, I realize now it’s like a lightning rod. Once the energy flows in, it must also be able to flow out, to discharge.

So once you fall into a given pattern, something disrupts the pattern, you now have an opportunity to reorganize the pattern, and you come out with a potentially new pattern.

Here’s an example of destabilization: literally slapping sense into someone

They get stuck in a loop of repeating, panicked thoughts.

Destabilization: >>”GET AHOLD OF YOURSELF!”<<

Restabilization: “I’m okay, thanks I needed that.”

This is one reason why a hard workout leaves you feeling so good afterwards. It’s a method of resetting those stress patterns.

You go in stressed out, freaking out about a million things.

You start sweating and push yourself to within an inch of your life.

You come out feeling like a new man (or woman).

You destabilized the pattern, opening an opportunity to restabilize.

You COULD go back into the old pattern, but what’s more likely is that you’ll figure out a new way to deal with your problems.

But let’s take one more example to really drive this point home.

Imagine someone drops some CRAZY life-altering news to you.

You begin with the belief that you’re your parents’ child.

Destabilization: On your 25th birthday, your parents tell you you’re adopted.

Restabilization: You accept that you’re adopted OR you decide that they’re lying.

Here’s an example of a bad psychological adaptation – denial.

It’s resistance and hiding from dealing with another possibility that would be too painful to accept.

This is where being flexible and “go with the flow” really proves itself.

If you can honestly and authentically handle any option or event that presents itself, you’re actually MORE stable than if you were to rigidly hold onto a singular option.

Have I lost you yet?

This psychological stuff is literally playing out in your movements.

You can tell a lot about a person by how they walk, carry their bodies, and hold their faces.

>>Check out the two women on the left.<<

Look at general movement as a whole.

Look at how they hold their faces.

Could you imagine a 10 year old walking that way?

It’s because you never see it happen.

…Or is it that they haven’t had years to accumulate layers of stress and trauma, like rings on an oak tree?

Children are fresh and malleable. Even if they had a limp from a broken foot or something, children just have more fluidity to their movement. They haven’t had a chance to get stuck in those patterns yet, and they’re open to the world.

So why do older people get so stiff and move like that?

Lifting too much weight?

A car accident from years ago?

Is it just age?

>>I don’t know how old this guy really is, but he doesn’t look like a spring chicken.<<

Look how well he moves. This video serves as a reminder – it’s not age.

Age is just a greater number of opportunities to accumulate junk in your body without getting rid of it.

It just takes time to peel back the onion.

By learning how to relax the body, discharge unresolved muscular and emotional stress, and reorganize tensions in the body, you can release the tension and move like a kid again.

You ever hear your mother tell you this one?

It sounds like a bunch of baloney, but with>>The Polyvagal Theory<< in mind… it may actually have some real truth to it.

The Ventral Vagal Complex is the prepares you for socialization. So it influences muscles in your head and face responsible for listening, seeing, and expressing emotion.

…Maybe there’s something to resting bitch face, after all. 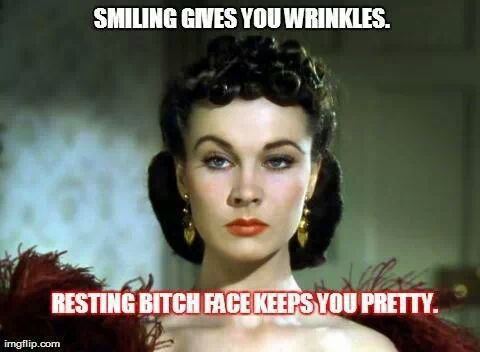 Next time you’re out and about, look at the faces of seniors.

Carefully observe how they “hold” them.

What emotion do you see?

Notice how their wrinkles reflect it.

You may notice many of their faces have “gotten stuck” in a particular pattern, like a default emotion.

Once I started putting all the pieces together, I couldn’t stop writing. These concepts are far-reaching, so give your eyes a break.

Next time we will discuss why stress-reduction isn’t the solution we think it is and several ways to help you live a healthier and more connected life.